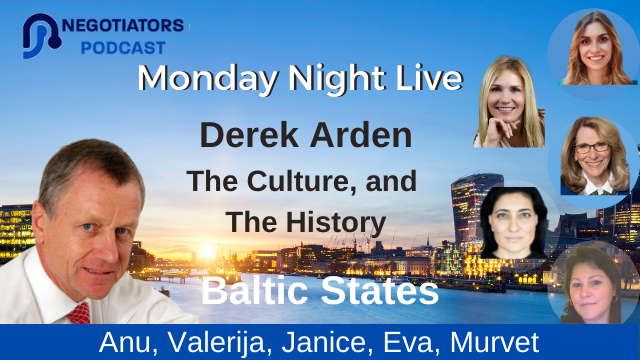 In This Monday Night Live Derek Talks To Five Guests With History and Stories About The Baltic States.

This part of the world has a fascinating history. The three Baltic countries were behind the “Iron Curtain” for so long, became independent in the early 90’s and joined NATO and the EU as rapidly as they could, I guess to protect their freedom.

I thought I would invite five guests from the Baltic states who have used my negotiation work to form a panel and share their stories, their views and their concerns in 2022.

This was planned before Russia invaded Ukraine so it’s even more topical now.

Anu Vask is a consul to the Ministry of Economic Affairs in Tallinn, Estonia.

Valerija Slavina was born in Lithuania, brought up in Belarus and works in London.

Murvet Sahin lives in Aarhus, Denmark and has worked in Scandinavia for the airline SAS