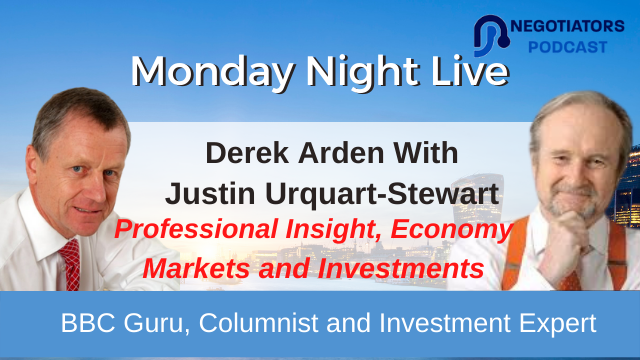 Derek is delighted to have Justin Urquart-Stewart back as a guest on Monday Night Live.

These are crazy times and it is great to get the insights of Justin who is a Media guru, columnist and investment expert.

Just a little history of Justin. When he graduated he joined Barclays, was posted to Uganda where he was ambushed by Idi Amin’s troops in their revolution. He still has a piece of shrapnel in his right leg from that encounter.

Justin became a stockbroker and has been the TV and radio face of first Barclays stockbrokers, then Seven Investment Management.

When Seven was sold Justin retired BUT soon was back in action setting up Regionally.

In between his work on TV and radio around the world. Discussed:- Ukraine, inflation, energy prices and the effect we can expect on commodities, markets and investments in the short term.